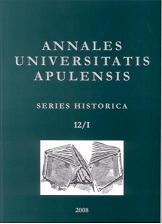 Summary/Abstract: The present study aims to emphasize the fact that the printings that appeared under the patronage of the printing-press of Râmnic are widespread throughout the entire territory of Bessarabia, and especially in the northern part of the province. The books that were usually found as collections were the following ones: Hymns, 1706 (2 copies), Triodyon, 1761 (4 copies), Anthology, 1766 (4 copies), Pentecostal Book, 1767 (4 copies), Triodyon, 1782 (5 copies), Gospel, 1784 (3 copies), Pentecostal Book, 1785 (3 copies), Anthology, 1786 (3 copies), Homiliaries, 1792 (4 copies) Gospels, 1794 (6 copies). There were found 1-2 copies of other types of books, too. We determined – up to the present state of research – that there are some significant centres that contributed to the spreading and diffusion of the religions books in Bessarabia. First, we have to mention the books of the Library of the Moldovian Metropolitan seat of Iaşi, and the hierarchs who spread them, among which Metropolitan bishop Veniamin Costachi distinguishes himself in this respect. Another centre with regard to this activity is the Monastery of Neamţ. This is the place out of which the Romanian printings were sent to the Bessarabian churches, and especially during the Bessarabian Romanians’ pilgrimages to this monastery. The bishopric of Huşi fully manifested himself in the same direction in the second half of the 18th century during bishop Iacob’s rule. As we might notice, the monastic centres substantially contributed to the spreading of the mass religious literature on the territory of the estranged province.