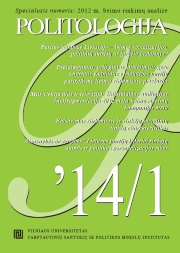 Summary/Abstract: Analysis of the influence of social networks on the electoral behaviour of people is based on the general assumption, that political communication which is important for voting decisions usually takes place in the small groups of intimates, characterized by high levels of interpersonal trust. Data of the post-election survey of Lithuanian population in 2012 allows a “modest” analysis of the impact of various characteristics of respondent’s social networks on their voting in the election to the Parliament. There were several hypotheses formulated based on the review of literature about the influence of social networks on political participation, which were empirically tested using self-reported data of respondents about members of their social network. The survey data show that in Lithuania political discussions in personal networks of people are not widespread and usually involve only family members. Only a small part of people belongs to politically homogeneous networks, which means that most people have relatively few reinforcing political interactions in their close social environment. Analysis of the relation between characteristics of the respondents’ social networks and their voting revealed that people, who are isolated from social and political communication because they do not have anyone with whom they can discuss matters that are important for them or talk about politics, also people, who do not have political discussions in their networks, also people, who belong to networks, whose members do not support any political party, are less likely to vote in the election. Contrary, people with more politicized social networks, also people who have knowledgeable political discussants, are more likely to participate in elections. The political homogeneity of social networks has a positive effect on an early decision about the vote and stability of voting over elections. People who share political preferences with their family, friends, co-workers or neighbours, are more likely to make their voting decision a long time before the election. People with higher political homogeneity of their social network are more likely to be loyal voters of the same party than people, who are isolated from social and political communication, or people with politically heterogeneous networks.