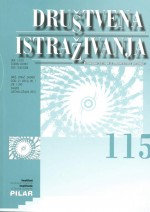 Summary/Abstract: This article compares the size of the Croatian public sector with public sectors of EU countries, using several indicators of public sector employment (i.e. its segments) and general government expenditure. Data is discussed from the perspective of potentially too big a public sector, as well as in the short-term context of the recent crisis and its impact on employment and general economic situation. Comparative analysis shows that most indicators imply that the Croatian public sector is not too big, except for the share of public enterprises' employees in total employment. The share of the general government budget expenditures for compensation of employees in GDP in Croatia is lower than the average share of EU countries, but it was a little higher than the average share of countries of Central and Eastern Europe over the first three years of the observed period. The share of total general government expenditures in GDP in Croatia is lower than the corresponding shares in EU and Central and Eastern European countries. Due to the effects of the crisis in Croatia, some restrictive measures regarding the wages and employment in the public sector have been implemented and/or planned. Along with the necessary containment of the potentially unsustainable fiscal trends, the problem of public sector employment should be approached with an emphasis on increased efficiency.