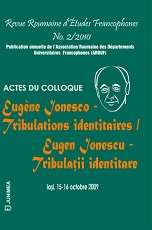 Summary/Abstract: In a text from Notes et contre-notes, Ionesco reveals the almost unexplainable way in which the play La Cantatrice chauve gets out of his control while being written: the language deteriorates irreparably, the characters start to behave aberrantly and the real world falls down uncontrollably. In the end, Ionesco realizes, surprised - as he himself confesses - that in fact he has become the author of a real «tragedy of language». In his turn, the author of this paper aims to explain what makes some of Ionesco’s plays extremely strange. He blames their «absurd» character on the undermining of intersubjective dialogue. In fact, it is about something much more serious, since, through the deliberate loosening of dialogue, Ionesco endangers a mental structure on which the «sémantèse» depends, namely the organization of the surrounding universe. This cognitive matrix, which fundamentally upholds the «principle of the real», is the «representation of the person» or, what French linguists call in a synthetic word, «la personnaison». The conclusion of this paper is simple: when dialogue is not established, the Self is in danger, as well as all that surrounds it.