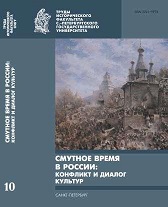 Summary/Abstract: European news publications occasionally reached Moscow since the sixteenth century. Russian translations of printed foreign newspapers are known since 1621. European press was delivered to Moscow on a regular basis since the mid-17th century. For the Russian government, foreign newspapers were one of the major sources of upto- date information about European events. The goal of the present paper is to provide an overview of the news about Sweden that reached Moscow from foreign press and to draw scholarly attention to this understudied primary source on Russian-Swedish contacts.