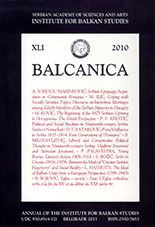 Summary/Abstract: The members of four generations of the national elite known as “Parisians” played a prominent role in the political development of modern Serbia. Liberals, Progressives, Radicals and Independent Radicals profoundly shaped the process of espousing and pursuing modern political principles and values in nineteenth-century Serbia. Implementing and creatively adapting French models and doctrines, the “Parisians” largely contributed to the democratization and Europeanization of Serbia and the eminent place the French influence had in her politics and culture before the First World War.