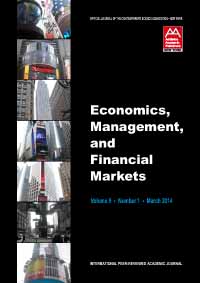 Summary/Abstract: The paper presents results of a study which estimates the impact of human capital on growth in Bulgaria over the period 2000-2012. The empirical models are based on the extended Cobb-Douglas production with three inputs-labor, physical capital and human capital. Export and Foreign Direct Investments (FDI) are included as well. The quantity of human capital is measured by the share of people in the labor force aged 25-64 having completed at least upper secondary education. The outcome suggests that the share of people with upper secondary education enters insignificantly the regression model. Moreover, its short-run accumulation is related negatively to real output per capita. When tertiary education is considered, the result is positive and statistically significant. In general, the study cannot fully support the hypothesis that education fosters growth because people with upper secondary education twice outnumber those with tertiary education. The results also imply that the upward trend of real output is attributed mainly to FDI, physical capital accumulation and export. A reasonable explanation of the non-significant role of secondary education is that the quality of human capital is a crucial factor for growth especially in countries where the average educational level is relatively high. According to the results of a partial correlation analysis foreign language proficiency explains a large part of the variation in output per capita across Europe.