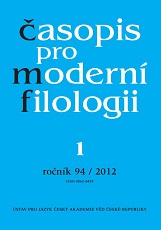 Summary/Abstract: The article is based on the generally accepted and widely applied dichotomy between spokenness and writtenness (the spoken and the written word) and also between literariness (or standard use) and colloquiality. The aim of the study is to show the groundlessness and impracticality of such an approach. It is suggested that the ideas we have about the first or the second type (mode) of language performance are not confirmed by real-life practice (or empiricism). Writing and speaking do not use entirely different linguistic means, and the situation of the written word and of the spoken word need not be given, constant or mutually different. The author prefers the solution based upon (proto) typical properties of texts and their actual concentration therein. The following part of the article presents (partial) results of an inquiry into the attitudes of Czech language users in various types of situations in which they express themselves orally or in written form and speak literary or colloquial Czech.