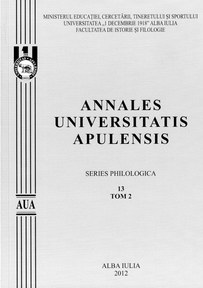 Summary/Abstract: My paper deals with two dramas by Eugene O’Neill that were translated and afterwards adapted for the stage in Romania, both adaptations belonging to artistic teams led by director Sanda Manu in the late nineteenseventies and early nineteen-eighties. I intend to reveal the translating act as being more comprehensive than just the textual version of a foreign work, including the adaptation of the text by the director and actors, with the aim of performance in mind. Since both translations – the literary-oriented and the stage-oriented one – require a hermeneutics of the source text and an integration of the target text into the receiving culture, I will dwell on the transformations that the stage-oriented version had to undergo in order to be allowed in performance by the Communist authorities. Of course that the literary translation will not be overlooked in the sense that I will analyze the overall achievement of the translators whose efforts were published in the 1968 Romanian edition of O’Neill’s plays and I will equally look at how the two dramas were enacted, relying for this on the stage reviews of the time, which reveal the distinctions between the playwright’s vision of the text and the director’s view, the latter being equally mirrored by the cuts and additions operated in the original script. Eventually, the dialogic and hospitable function of language comes to light during the manifold stages of the translation process, as both the textual versions and the productions of these plays brought their contribution to the ongoing transatlantic connection that O’Neill’s spirit entertained with Romanian culture.