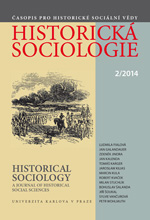 Cestování Čechů na jihoslovanské pobřeží ve 20. letech 20. století
The Travel Habits of Czechs to the Yugoslavian Coast in the 1920s

Summary/Abstract: This article centres around the Czechoslovakian perception of holiday travel to Yugoslavia in the 1920s with particular attention to the typology of Czech tourists. It has been shown that travel to Yugoslavia was very popular among the middle classes who had enough time and money. The wealthier classes preferred France. The main selling points travel agents and hotel owners used to promote travel to Yugoslavia were affordability, service targeted to Czechs and Pan-slavism. The idea of a mutual Slavonic tradition had been in existence since the 19th century. Evidence would seem to show that the most significant factor for repeat travel was affordability. Conservative Czech tourists remained loyal guests of Yugoslavia during the 1920s and 1930s.