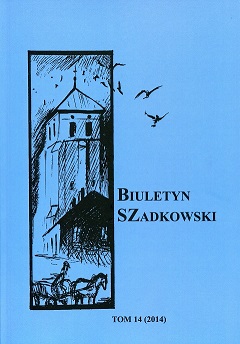 Summary/Abstract: The presented list of the local diets (sejmiki) was based on the analysis of three sources, the city court books of Sieradz, the Pawiński Files Teki Pawińskiego and Pstrokoński Files Teki Pstrokońskiego. In the case of the first one I made use of a collection of accounts where lauda, local diets universals, protestations and confederation acts were included. In the case of Teki Pawińskiego and Teki Pstrokońskiego there were the 19th century copies from the above mentioned city court books of Sieradz and Piotrkow that no longer exist. The collation allowed to prepare the chronology of Sieradz diets and to eliminate mistakes particularly as far as surnames are concerned. The records concerning local diets, including lauda, were included in city court books, which was to confirm the validity of acts and to constitute the source of knowledge about decisions taken before. In the case of the town of Sieradz both lauda and protestations as well as manifestations of political nature related to local diets were included in account books ,which was similar to the practice followed in Wielkopolska. The list does not comprise all the local diets that took place during the reigns of two monarchs Michal Korybut Wisniowiecki and Jan III Sobieski as their lauda have not survived until the present. The local diets in the Sieradz voivodship were called by the monarch, while the elective ones by the voivod or the castellan of Sieradz, who twice called the nobility to gather at local diets. Occasionally the local diets lauda lacked the place or date of transcription or two different ones were stated.