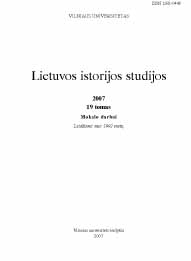 Summary/Abstract: Historiography has devoted little attention to the issue of advertising in Lithuanian periodicals during the period between 1918 and 1940. The article investigates this issue from two aspects. One of the aspects is a quantitative characteristic of advertising. Calculations of the data of adverts in periodicals in 1918–1940 were made, which allowed presenting the comparative analysis of quantitative parameters according to the nature of publications and their readers. During the period under discussion the number of adverts increased. For example, from 1918 to 1939 this number increased by as many as seven times in the Lietuvos aidas, in the Lietuvos ûkininkas the increase was fivefold during the period from 1919 to 1939. Fluctuations in the number of adverts were characteristic of each publication separately, which depended on the level of popularity of the publication, prices of advertising, and the economic situation in particular. A decrease in the number of advertised items during the period between 1930–1935, which is related to the economic crisis, is observed. The greatest number of adverts in the dailies under investigation were published in the semi-official newspapers Lietuva, the Lietuvos aidas, and in the weekly Ûkininko patarëjas. When investigating the periodicity of advertising in the press, two waves of an upsurge (in spring and at the end of a year – November-December) and two waves of a decline (at the beginning of a year – January-February and in summer – at the beginning of autumn) were noticed. The number of adverts increased markedly at Easter and Christmas. Saturday was the most popular day for advertising. The second aspect of investigation is dividing the qualitative development of advertising into periods. The analysis carried out permitted four periods to be distinguished: 1) 1918–1920 – post-war advertising is not impressive, the space taken by it was small, only some of the adverts were illustrated, main advantages of goods and services advertised were characterised as cheap and of high quality. Large manufacturers who published adverts in periodicals were wholesalers from abroad, the local market mostly offered the press or the sphere of services. Advertising of warehouses, shops and goods contained therein rather than that of separate trademarks or brand products was much more common. 2) 1921–1926 – it did not take long for advertising to come to life again following economic and political disturbances. First of all, illustrated advertising increased in number considerably. Adverts did not only provide information about where one or another kind of goods could be found but also accentuated the quality, necessity and singularity of the product. Competition of Lithuanian manufacturers with imported goods was growing.