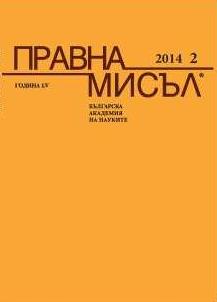 Summary/Abstract: The article deals with the problems of administration of justice where the European arrest warrant is re- fused because of the person claimed resides, or is permanently resident in the Republic of Bulgaria, or is a Bulgarian national, concerning cases where is accepted for execution deprivation of liberty as a punishment or a measure of remand for detention about proceedings in transfer of sentenced person. The article is written on the occasion of contradictory jurisprudence, noted by me, and is addressed to lawyers working in the area of Inter- national substantive and procedure criminal law. A short survey of the basic characters on the initial proceeding by Chapter V, Section ІІ of Extradition and European arrest warrant act, as well as the subsequent one by Article 44, par. 11- 12 of the Extradition and European arrest warrant act, according to the procedure established by Article 457 (2) to (5) of the Criminal Procedure Code is made. Finally, special attention is given to some practical problems in relation to the ability of competent courts in the Republic of Bulgaria to reduce the imposed punishment under a foreign sentence admitted for execution, to identical criminal offences.