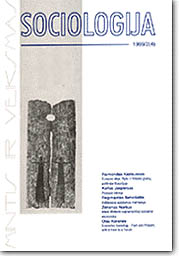 Author(s): Indrë Gajdosikienë
Subject(s): Social Sciences
Published by: Vilnius University and Klaipeda University
Keywords: culture of poverty as defined by Oscar Lewis; and its critique; idea of adaptation to the longterm deprivations

Summary/Abstract: In this article the concept of the culture of poverty as defined by Oscar Lewis, and its critique was reviewed, and methodologies for exploring adaptation to poverty suggested. Lewis described the culture of poverty as a way of life, clusters of traits of some of poor people, that develop as an adaptation to living in poverty in a capitalist society, and from then are passed through generations. Lewis came to this idea from his Marxist background. The wording of the concept, however, was not very successful, as reflected by the number of misunderstandings and criticisms. Some of them, though, rise from a different understanding of culture. The theory behind the Lewis’ concept was not developed well. The concept soon gained popularity among politicians and wider audience, but was largely discarded in the intellectual circles. The researchers, who tried to check the culture of poverty hypotheses, also came to ambiguous conclusions. It was partly due to the vagueness of the definition of the concept, and partly because of the research methods used. The idealistic model of culture as consensus, because of the separation of “what is in the mind” vs. traits, behaviors, way of life etc., could be a clearer way to understand and analyze some of the poverty issues, especially when poverty is defined by consensus. However, for those interested in the issue of poverty, it would require a connection with other, more “materialist” variables in order to understand and explain the issue more fully: the idea of adaptation to the longterm deprivations can help to understand the behavior of people living in poverty better.