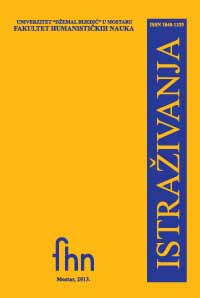 Summary/Abstract: Bosnian ban Kulin has been mentioned in historical literature for a long time. Yet, written historical sources and material evidence about this important ruler are limited. The latest material evidence is the finding from Podbrjezje, a village near Zenica, in 1964 - a door frame with the inscription that mentions, among others, great judge Gradjesa. Unfortunately, there is still no relevant interpretation of it in the historical literature. This paper seeks to point out certain characteristics of the tablet of judge Gradjesa, as well as its link with the history of medieval Bosnia and Herzegovina at the end of the 12th century. It should be noted that the tablet of judge Gradjesa was made in specific medieval context of the late 12th and early 13th century. The inscription on the tablet, which includes some notions that create both confusion and delusion, gave rise to many different dilemmas and controversies. Therefore, it is necessary that all those notions are identified, interpreted and placed in the historical context, as well as checked in historical sources and literature.