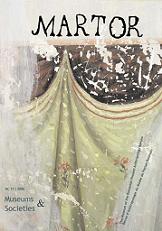 Summary/Abstract: American society is frequently defined by its diversity. The population of the U.S. is an extraordinary mix of nearly every ethnic group and race found on earth. Each group has brought its own language, customs, traditions, music, dance, food, and religion. The attitude in this country over the past thirty years is that all of this enriches the social structure. Originally American society was defined primarily by the European values imported by the original immigrants in the 1600s with a little derived from the lesser indigenous Native American heritage. What can be seen as a schizophrenia of identity has been reflected in the museums of the United States since its founding. The art and history represented the mainstream majority European heritage. The artists displayed, the milestones achieved, and the individuals who drove the nation reflected this heritage; the audiences who visited these institutions were most frequently members of the majority society. Art and history museums in the United States until the latter decades of the twentieth centuries marginalized the contributions of non-white artists. As part of the Americanization movement of the early decades of the twentieth century, several expositions of arts and artifacts, music, dance and sports found in immigrant communities were staged in cities across the United States. While raising levels of pride among participating community members, these temporary displays were meant to show the remnants of culture that would be shed as the immigrants became part of the American melting pot. This paper reflectively examines the development of ethnic museums in the United States and the attitudes within the supporting communities toward their genesis. The purpose of this paper is to understand the background which led to the creation of single-ethnic group museums.