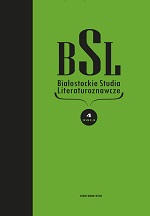 Reportaż. Z historii gatunku w wieku XIX
Reportage. From the history of the genre in the 19th century

Summary/Abstract: The article refers to forming the genre of reportage in the 19th century, pointing at its strict connectioin with the literature of that time. The process of the genre reconstruction is hindered, on the one hand, by the morphological openness of the form related to the types of expression which appeared in the press (letter, report, journey description, feuilleton, article) as well as in belles-lettres (novella, story), on the other hand, not high opinion of a reporter’s work, usually associated with sensation and chase after novelties. Despite these hindrances Polish literature notes in the 19th century and at the beginning of the 20th century a number of splendid models of report writing, from J.I. Kraszewski, through Sienkiewicz, Reymont or Korczak, today perceived as an important stage of forming the modern interest in documentary writing.