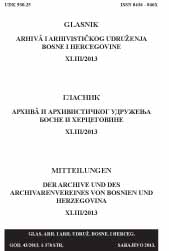 Summary/Abstract: The transition process in Bosnia and Herzegovina and the environment, among other things encourage reforms in the economy that are transforming the public and the state to private ownership through bankruptcy and liquidation shut down many legal entities among which some of them were real economic giants. Assets were sold, workers laid off, and what happened to the archive material? It is mainly dependent on the awareness of responsible persons and bankruptcy trustees. The registry service of the Archives of Tuzla Canton followed the work of the bankruptcy trustee and until 2012. We took over 43 archival materials of extinct entities for a total of 655 linear meters of material. Repossessed archival material is incomplete and often insufficient to meet the basis for the civil rights of former employees. Realizing the serious demands of employees and their civil rights that they deserve after so many years of work, Archives of Tuzla Canton is trying to ensure that it is possible to extract more useful information from archival material, which is one of its basic functions of action - providing information and facts taken from the records. Analysis of requests that were resolved in the last five years has shown to positively respond to requests in 77.6 % of cases, which is acceptable, because most of the assumed records are incomplete, and in some cases people do not give accurate information when applying. However, as long as there is only one case deprived of one’s human and civil rights we can not be happy.