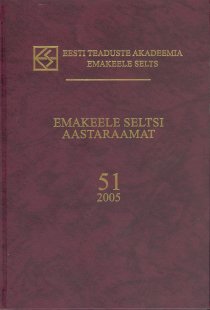 Summary/Abstract: The research tradition of the Estonian language usually identifies the Old Literary Language with the written language of the extant 16–18-century texts, thus ruling out the possibility that already in the Middle Ages there may have existed a variant of standard religious Estonian language. However, some circumstances that were revealed in the analysis of early Protestant written language enable us to assume that in the Middle Ages there still may have existed some elements of a unified religious language. Proceeding from the treatments of D. H. Green and other researchers who put forward a language situation that combines spoken and written communication, the article presents the model of a „false” literary language that could describe the origin and distribution mechanisms of this hypothetical variant of Estonian. The false literay language can be defined as a variant of language proceeding from written texts but spreading by auditory means. Such a model enables the researcher to show that in the Middle Ages there may have developed to a certain extent an Estonian-language discourse on the basis of religious texts in Latin. This variant of the Estonian language may have been created and spread by laymen with an Estonian background who were involved in the work of the churches and monasteries; they could not read themselves but understood the heard Latin text and translated the message into Estonian and passed it on. Some examples of the early Protestant written language, which deviate from the contemporary linguistic canon but at the same time meet the requirements of the false literary language and could thus be relicts of medieval language use, support this hypothesis.