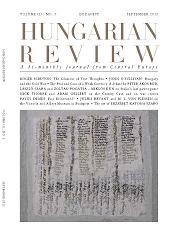 Summary/Abstract: It is once again a great pleasure to be taking part in a conference at the House of Terror Museum in Budapest. Taken out of context, that sentence might sound a little odd – what kind of person has a good time amid all the evidence of brutality and oppression? But those of us who have attended the conferences organised by Dr Schmidt at the Museum know that they are invariably exciting intellectual events as well as significant historical explorations. We all of us learn far more than we teach here. And, of course, these conferences take place in the most beautiful metropolis in Central and Eastern Europe. As a resident of Prague I chose my words very carefully just now: Prague is a delightful city, but it is not a metropolis. One might distinguish the two cities as follows: Prague is chamber music, Budapest is operetta, Prague the finest beer, Budapest champagne. But I should stop there before I am overheard across the border. I would also like to thank the Konrad Adenauer Foundation for making this occasion possible in conjunction with the House of Terror Museum. Adenauer was a giant of the Cold War and of European construction. His early entrenching of West Germany’s commitment to the West ensured that when Germany was united, it was united as a free democratic country allied to the democratic West and not as a dangerously neutralist floating island.