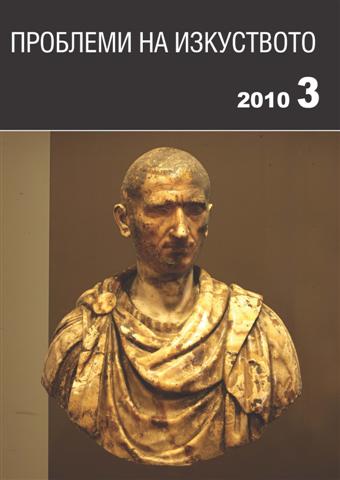 Summary/Abstract: The church of St George is situated in the territory of the village Churilovo, Petrich region, but was founded in the village Igumenetz to which belonged the 12 quarters (mahali) situated on the southern slopes of the Ograzhden Mountain . The church of St George, around which was formed the so called Churilovski Monastery was completed in 1858 . The mural paintings have a distinct decorative character . Regarding the iconography we should note some didactic scenes, such as the image if a young woman that is rubbing over her face with a cream from a vessel that is being held by the Devil, which is situated on the northern wall of the women’s section . This scene which is not that popular can be seen in a number of churches in the Southern and mainly in Southwestern Bulgaria . The literary basis of the scene can be found in the edificial collection Lectures for Women and Girls compiled by the monk joseph the Bearded in 1756 . The whole open narthex of the church is covered with paintings . Some of the murals are also painted over by non-professional artists during the 1960s . In the arches of the cross arcs are presented the tortures of the sinners and their attributes . On the Western facade there is the wide composition At the Fortune-teller for Cure, The Confession of the Pious and The Confession of the Sinner and a short version of the composition the Last judgment . The mural paintings in the church are not signed or dated but on the basis of the study of a number of churches in the region it is supposed that they have been created during the last two decades of the 19th c. The anonymous icon painter belonged to the group of unschooled painters that have worked actively during the second half of the 19th and the beginning of the 20th c . in the Southwestern parts of Bulgaria . The church has a three-part iconostasis which almost wholly painted with the exception of some parts that are wood carved . The decorations are mostly with flower elements . Most of the icons on the King’s row as well as some small icons are the work of the icon painter Yakovos Yakoumis . The hierarch’s throne, the pulpit, the ambon and the Holly Table are also with wood carvings and also have polychrome decorations .