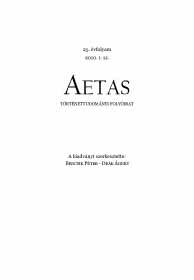 Summary/Abstract: The mediating attempts of Franz König, cardinal of Vienna – acting on behalf of the Vatican – in the Mindszenty case were an important scene of Austrian-Hungarian ecclesiastical diplomacy during the cold war. Analyzing the case within the dimensions of our inquiry is especially interesting as it symbolizes many aspects of the latitude available for the church behind the iron curtain as well as its attempts to find a viable path. However, our research is not limited to the thematization of this “abnormal situation” brought about by the Hungarian Primate (as in the autumn of 1971 American diplomacy characterized Mindszenty's fifteen-year stay at the American embassy in Budapest), as we have the study of the question within the context of all involved powers in sight, drawing a parallel between the possibilities the churches in the satellite states had. Due to its geo-strategic position, Austria was the connection, the bridge in ecclesiastical policy as well, in which “mission” the cardinal of Vienna, Franz König played an important role in the era discussed.