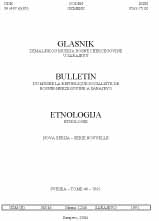 Summary/Abstract: of Herzegovina, proved that so designed microresearches, based on ethnological and historical material, could bring about results which are to be useful for more versatile examination of people relations, migrational developments, the origin, and in particular, islamization and status of population in social and state structure, and in a macroplan as well. Before summarize our report, it should be emphasized that Dreznica is a region of very favorable natural-geographic conditions for establishing a settlement. Mild Mediterranean climate, abundance of water, cultivable soil, and mountain pastures in nearest vicinity, laid a foundation for establishing and maintaining human dwellings in this region from the earliest times to the present. Other important characteristic of Dreznica is its location in the borderland between Bosnia, on one side, and Herzegovina, on the other, in a vicinity of a route connecting Adriatic coast with provinces, and, across Makljen, sloping down to Vrbas River valley, and, across Ivan-sedlo, to Bosnia River valley. Besides, from this main route, a side-road branches off into Drezanjka River valley, arriving at Raskrsce, where joins the road coming from Mostar and leading to Duvno, and another, branching off at Raskrsce, and through Dugo Polje leading to Rama. Besides agriculture and cattle breeding, which have been the constant of economy of Dreznica population from the founding of settlements in Dreznica up to the present, probably from the Middle Ages until the fourth decade of the 19th century, the population of Dreznica has, on the whole or only partially, had other obligations as well (safeguardding the interior and exterior limes, protecting the routes, and catching and training birds for hunt), which have, among other things, provided certain administrative-political autarchy and more favorable social-economic status as compared to population with no such obligations. On the basis of our researches in Dreznica settlements, we have come to a conclusion that settlements in Dreznica have been founded according to natural-geographic characteristics of the terrain, in this narrow river valley of canyon type. There have been three settlements: Donja Dreznica, Strizevo, and Gornja Dreznica, each one located in its own widening of Drezanjka River valley. Contemporary population of Dreznica, the Muslims and the Croats, are mainly descendants of inhabitants registered in the first “defter” after the Turkish conquest, and had, most probably, lived in the same region during the independence of the Bosnian state.