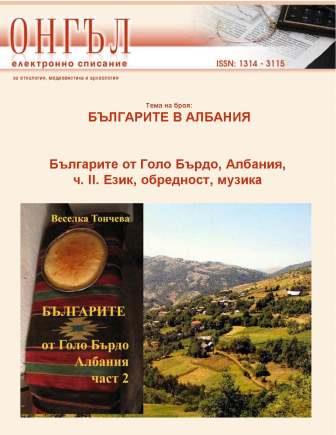 Summary/Abstract: The present volume of the book series „The Bulgarians from Golo Bardo, Albania” the first volume, where the author Veselka Toncheva considered the basic characteristics of the Bulgarian community in the region of Golo Bardo, (the Republic of Albania) on the basis of fieldwork materials from the villages of Steblevo, Klenye and partially from Vormitsa – history, religion, calendar and family rites, music and identity. Most of the folkloric materials in the current second part of the book were recorded in Golemo Ostreni, and the rest come from the villages Orjanovo, Malo Ostreni (Malestreni), Steblevo and Vormitsa. The academic texts in the first section focus upon different aspects of ceremonial rites, music and language. The observations and the analyses of the traditional rites and the music of the Bulgarians in Golo Bardo (by Veselka Toncheva) rest upon an exact documentation of still performed family rituals in the villages Golemo Ostreni: marriage (August 2010) and sünnet (circumcision) (August 2009). The text presents descriptively their main parameters, compares them with familiar models on the Bulgarian ethnic territory (and on the territory of contemporary Macedonian Republic) and outlines their importance for the festive culture of the studied community. On the other hand, Tsvetelina Dimitrova dwells on two key factors of the cultural specificity of the Bulgarians from Golemo Ostreni – the family rites and the language. The family rites include birth and funeral practices. The main stages of the birth and funeral cycles, especially the analysis of the key elements is carried out within the Bulgarian traditional ritual system. The attitude toward the language as identity marker, i.e. toward the motif of mixing the languages and of mother tongue against the background of ours has been analysed. The appendixes include songs (some of which with note texts), toponymy (gathered also during earlier fieldwork visits by Petya Asenova, Alexey Jalov and Konstantin Rangochev) and the vivid speech of the people of Golo Bardo, i.e. narratives of a broad thematic palette: about the residential areas and the history of the region, about religion, calendar and family rites, folk-belief, music, traditional costumes, occupation and identity. This section contains mainly festive-ceremonial and everyday songs recorded in the village of Golemo Ostreni and unknown in Bulgaria songs form Vormitsa (verbal texts only), cited in Nikola Pavli’s book about Vormitsa, published in Tirana in 2009 (Nikola, P. “Vërnica“, Tirana, 2009). A thorough investigation of the region is not an easy task but due to the systematic work in the separate settlements, the main goal of the book series –to outline the complete “image” of the community in Golo Bardo including its traditional culture and Bulgarian identity – is successfully fulfilled. The traditions the Bulgarians in Golo Bardo in Albania are inscribed in the present as well ...