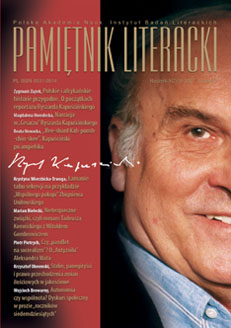 Summary/Abstract: The article presents the circumstances under which Kapuściński’s books entered world literature. The breakthrough is here the year 1983 when the English translation of "Cesarz (The Emperor)" was published. The book was soon recognized as a vital event in the literary world and shortly after became Kapuściński’s most often translated report; in the 1980s a dozen or so translations into various languages were published as well as a well known theatre performance at The Royal Court Theatre in London was prepared. The success of The Emperor opened the gate into foreign markets and the author himself was granted a pass to the leading world writers. The counterpoint to foreign proliferation of Kapuściński’s reports was almost a complete publishing paralysis of his literary creation in Poland. Nevertheless, echoes of this international popularity reached Poland and at the end of the 1980s eight Kapuściński’s books were eventually reedited.