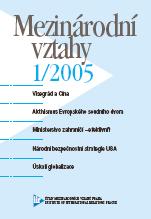 Summary/Abstract: US National Security Strategy (US NSS) published in September 2002 introduced key points of the security policy of President G.W.Bush. He had to respond to major change in the US security paradigm brought by the 9/11 terrorist attacks. Analysis of this policy framework document and its application in practice on the background of its broader institutional context exposes the main points of continuity and fundamental change in the US security policy. The most important innovations concern the use of force in pre-emptive military strikes, new conception of the dominant position of USA in international system and the will to defend it at all costs against any future peercompetitor as well as changing perception of US allies and permanent politico-military alliances such as NATO. For better understanding of Bush’s policy we have to go deeper and look into the roots of his security policy thinking and broader political context, including his new personal motivation and historical parallels. More frequent use of pre-emptive strikes weakens also still dominant strategy of deterrence, still preferred by most US allies who are therefore critical towards some radical steps of Bush administration in this area. Last but not least, we should not forget that as important is also how the new US radical rhetoric and innovative tools are turned into practice (especially during the US military campaign in Iraq). After re-election of President Bush in November 2004, the US NSS 2002 remains the principle foundation of future US security policy for at least four more years.