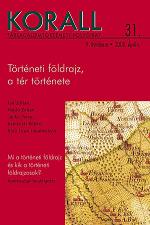 Summary/Abstract: The main research questions of this study were to find out if there were a huge number of weather anomalies the 1830s and whether these extreme anomalies influenced the Hungarian nobility’s stance on social reform. The research was based on documentary sources and time series of instrumental observation in Buda. The research results verified that the decade of the 1830s was one of the most extreme periods of modern Hungarian environmental history. For the eleven years analysed, the average of monthly anomalies per year was nearly half a year (5.7 months). The gravity centre of climate change was 1833 and 1834. In 1833 alone there were seven months when weather anomalies occurred, moreover, there were five cases of extreme monthly averages of temperature and precipitation as well. Similarly, in 1834 there were seven extreme months; however, double anomalies occurred in only three cases. The structural climate analysis of the 1830s reveals a rather cold and dry climate profile. It is inferred that the high frequency of climate anomalies and series of ecological and economic conflicts positively influenced the attitudes of Hungarian nobility towards social reform.