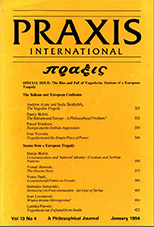 Summary/Abstract: It is appropriate, even if under the current circumstances tragic, that the last issue of Praxis International be devoted to the civil war in former Yugoslavia. Praxis International was started 12 years ago, in April 1981, under the joint editorship of Richard J. Bernstein and Mihailo Markovic. Two main goals guided the journal in these early years: on the one hand, one wanted to revive an international context of discussion among those thinkers who loosely identified themselves as "democratic socialists" in opposition to the developing agenda of neo-conservatism both in Europe and the United States; on the other hand, one wanted to express solidarity with and provide an international outlet for some members of the previous "Praxis" group, like Mihailo Markovic, Gajo Petrovic, Sveta Stojanovic, Zagorka Golubovic and Rudi Supek, who, with the exception of the latter, were removed from their university teaching positions under Tito. Most members of the former "Praxis" group, except for the group around Gajo Petrovic, were represented on the board of Praxis International.