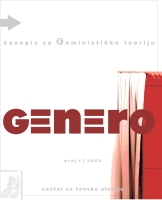 Summary/Abstract: The essay represents an effort in reading the movie The Matrix (1999, directed by brothers Wachovsky) from the perspective of Cultural studies; more precisely, the perspective is from the theories of the body, a focus of gender studies in the last decade of the 20th century. The analysis looks at how the movie, on the one hand, makes the impression of political correctness in thematizing gender and racial identities and relations and, on the other hand, maintains its basic albeit invisible mysogynic layer. The authors tried not to follow the gender and racial stereotypes characteristic for the major part of the contemporary Hollywood production, but were not consistent in their effort, since, among many »gestures of good will« toward women and Afro-American, a number of remnants of opposed points of view is woven into the movie. However, the level of characterisation is not the layer within which these mysoginic assaults are to be looked for, because they are built into the very fable of the movie, which speaks about the ultimate paranoya of male science-fiction: the paranoya of monstruous female.