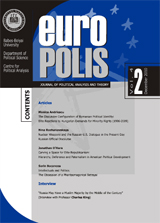 Summary/Abstract: Professor Charles King teaches Government and International Affairs at Georgetown University. He has been a close observer of Central and Eastern European affairs in the past two decades, collaborating with major media institutions such as CNN or the BBC and authoring numerous articles in prestigious publications such as the Washington Post, Foreign Affairs, Foreign Policy or the Los Angeles Times, as well as in leading academic journals. He is also the author of five books dealing with relevant issues for the region. In this exclusive interview for Europolis, Charles King speaks of Romanian politics, the state of interethnic relations between Romanian and Hungarians, Romania’s relations with Moldova, the EU or the US and provides relevant insights on the security perspectives in the Caucasus, all the more important following the recent bombings in Moscow.