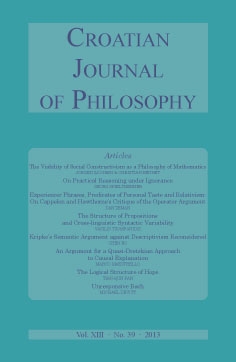 Summary/Abstract: In this paper I will present Jaegwon Kim’s causal explanatory exclusion principle as described in Explanatory Exclusion and the Problem of Mental Causation (1995) and Fred Dretske’s version of the two explananda strategy as depicted in Mental Events as Structuring Causes of Behaviour (1993). I will attempt to demonstrate that Dretske’s theory is not fl awless in its assumptions but that it nevertheless demands a close look in so far as it provides us with a valuable theory for explaining certain events.