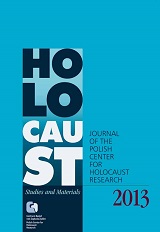 Summary/Abstract: When Jürgen Stroop, the suppressor of the Warsaw Ghetto uprising, was brought in 1947 to Poland, his trial was projected to be the most important of those held to date against prominent Nazi officials in Poland. According to the Jewish press it was to be a “small Nuremburg,” a final reckoning for the crimes committed against the Jews of Warsaw during the Holocaust. Yet, four years later, in 1951, when the trial finally took place, its proceedings were barely noticed, both by Poles and by the still numerous Polish-Jewish community. Despite the particular place of the Jewish ghetto uprising in the Holocaust historiography, significant organizational efforts and protracted dealings to obtain extradition rights, the trial was to fall victim to the new era of Polish politics and Stalinist propaganda, exemplifying the growth of politically-shaped historiography. This article looks at the proceedings against Jürgen Stroop and his co-defendant, Franz Konrad, and includes material from the trial, in particular Stroop’s testimony regarding the Warsaw Ghetto uprising.