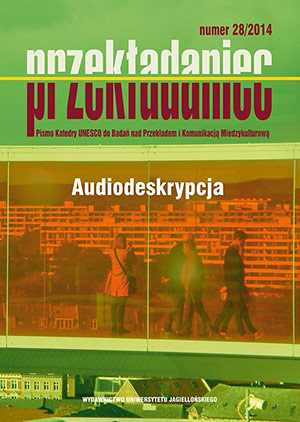 Przekład, adaptacja i granice wyobraźni
Translation, Adaptation and the Limits of Imagination

Summary/Abstract: The article focuses on three different versions of Alice’s Adventures in Wonderland created by the very same Polish translator, Antoni Marianowicz (1924–2003), in the second half of the twentieth century. The paper initially describes his unabridged and frequently reprinted 1955 Polish translation of Alice, then discusses the musical adaptation from 1975, to fi nally concentrate on the third version, i.e. his 1996 translation of a picture book originally published by Disney corporation. The subsequent Polish versions of Alice were published at an interval of almost exactly twenty years, most probably making Marianowicz the only translator who retold Alice’s adventures in Polish at three different points in the twentieth century. The article highlights the distinguishing features of the three Polish Alices, explains what other texts, apart from Carroll’s original, these versions are indebted to, as well as examines the possibilities they offered to the translator and the ways in which they limited the translator’s imagination.