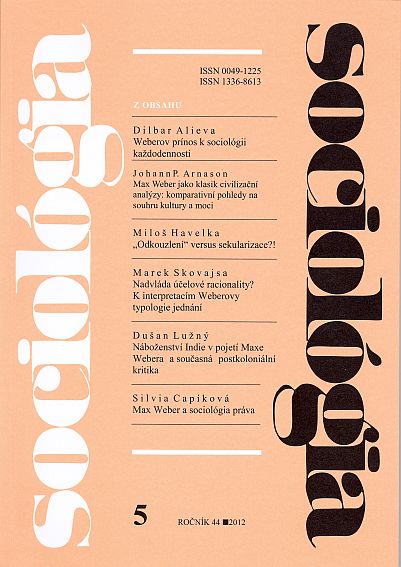 Summary/Abstract: Weber’s Contribution to the Sociology of Everydayness. In despite of the fact that Max Weber has not elaborated a coherent theoretical conception of everyday life, his contribution to the crystallisation of this sociological subdiscipline is very significant. This paper is an attempt to reconstruct Weber’s sociology of everyday life by using his own considerations, which are dispersed throughout his works. He begins with the dichotomy of everydayness and non-everydayness, which was developed long ago by the representatives of German romanticism (Novalis, Tieck, Brentano, E. T. A. Hoffmann). But unlike them, Weber considers non-everyday phenomena as extraordinary psychical states of a charismatic nature (ecstatic, mystic, hysterical, orgiastic, visionary), which are mainly associated with religion. Everydayness, however, is mainly linked to economic aspects of ordinary life. Unlike an ethnographical approach, which would propose the descriptions of various aspects of everyday life, Weber concentrates on its metaphysical and religious foundations. It seems that the matrix of metaphysical meanings is more important for him than the traditional temporal distinction between ordinary and extraordinary days. Non-everydayness embodies the sacred, just as everydayness represents the profane. According to Weber, this antinomy may be overcome by the method of active asceticism, which we find in the Protestant ethic. It supports the economic activity of the representatives of the middle classes. Their efforts contribute to the creation of everydayness, which successively gets rid of the non-everyday elements in the form of contemplative, orgiastic, and ecstatic religiosity. Therefore everyday life emerges from non-everydayness as a consequence of the long process of rationalization that was developed at the Occident. Thus the sociology of everyday life by Weber appears as a derivation of the sociology of religion. Sociológia 2012, Vol. 44 (No. 5: 513-547)