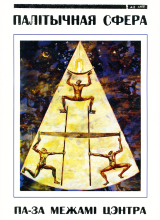 Summary/Abstract: The article covers the methodological problem in studying religious identity and political culture. The author criticizes Weberian approach to strict influence of religion on social behaviour, trying to trace the roots of Belarusian tradition of seeing the availability of western and eastern Christianity as key-division in national and civilization identity, which has transformed over the last decades to regionalist difference seen as a cause of different religious identities.