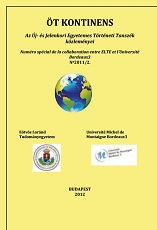 Summary/Abstract: The development of Franco - Hungarian relations was subordinate to "the Soviet connections" and to France's traditional relations with Eastern-Central European countries. The bilateral development with Paris can be evaluated through the changes in their perception of the "national communist" regime coming to power after 1956 as well as their judgement of János Kádár. The nadir of 1956 - 1959 was followed by the slow rapprochement of 1960 - 1963 then a rise in 1964 -66. The year of 1967 showed fall due to the relapse of Hungarian overture to the West followed by another rise from the beginning of 1968 to August of this year. The Hungarian participation in the Czechoslovakian intervention ruined primarily the public reputation of Hungary and reduced cooperation between the two countries in the sphere of political relations as de Gaulle's visit diplomacy considering this participation as a failure. The other great "loser" for participating in the intervention was Poland, and resulted in canselling first secretary Gomulka's invitation to France, and de Gaulle's visit to Hungary was also cancelled. A greater problem was that no significant progress was made in the sphere of economic and trade relations between the two countries. On the whole, Hungary played only a secondary role in de Gaulle's policy of Eastern ouverture.