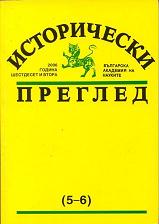 Summary/Abstract: In the conditions of the gradual advance of the Russian Empire (the middle of the 18th c.) southwards in the Ukrainian lands, in the direction of the Black Sea and the Sea of Azov, the policy of the State was aimed military and agricultural colonization. The prerequisites for setting up “Russian” enclaves, the concrete steps in this respect and the development of the newly established formations are the subject of this study. The author in particular dwells on the recruitment and subsequent life and activity of two hussar regiments with Bulgarian participation - the Macedonian and the Bulgarian. The problems connected with the equipment and command of these units, the relations with the official authorities and the native population are examined. The military operations in which the regiments took part are followed up. This study adds to the knowledge of Bulgarian history during that period by popularizing so far little known archival material.