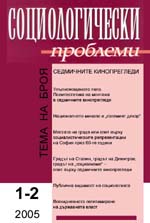 Summary/Abstract: At the beginng of 21st century, development of science and technologies is one of the main priorities for Bulgaria as it is a way to achieve economic and social prosperity, as well as guarantee national security. Among the other strategies launched in this field at the end of 1990s, was also the „dual use“ concept, i.e. products and technologies that have both military and civilian applications. This concept can be understood only by tracking out how the relations between military and civilian industries have been historically produced in the processes of technological innovation. This is the reason why I tried to understand how the relationships between „special“ and civilian production were established during socialism. Applying the „socio-technical networks“ approach, I traced back the processes of technological transfer between these two productions by studying the case of one of the big enterprises of the Bulgarian defense industrial base. The main goal of the analysis is to put an accent on those specific characteristics of military-civilian technological development during socialism that are key factors for the proper understanding of the „dual use“ concept today, on the one hand, and that determine the transformation trends of this development during the post-socialist period in Bulgaria, on the other hand. My study proved that despite the secrecy of military production and its isolation from civilian industry, certain forms of technological transfer between military and civilian spheres existed, and though „hidden“, were widely spread during socialism. The realization of these processes required the interaction of a great number of heterogeneous actors that co-constructed the networks of military and civilian production. As a result of the complex interweaving of lots of factors, stable patterns of functioning of these networks appeared which were retained even after the changes in 1989.