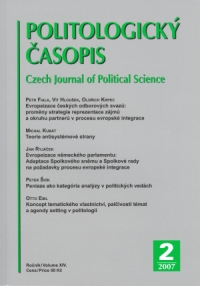 Summary/Abstract: The article attempts to interpret changes in the character of communication strategies applied in election competitions during the 20th century. The most important change seems to be shift from cleavage-based to issue-based communication in election campaigns. Such a shift can be interpreted as the result of modernization process (individualizing) and the growing rationality of both factions: voters tend to support specific political parties expecting certain benefits, whereas political parties tend to emphasize those issues which can satisfy voters` demand. Over time, particular issues can, on the basis of successfully executed policies, be “transferred” into the ownership of specific political parties. When the communicated issue is salient, the issue ownership can bring advantages in polling. This brings a new dimension to party competition: Now parties have to compete with other agenda setters for (issue) dominance in the public, media and political spheres.