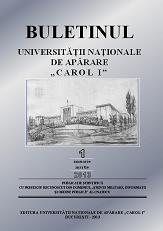 Summary/Abstract: The terrorist attacks that have occurred lately in the world prove that the asymmetric threats, especially the terrorist ones, have not been dimensioned according to the degree of danger that they pose to the society and cannot be controlled using the usual political-military approach. At the beginning of this century, terrorism - as a phenomenon - and terrorist groups – working as a network or independently – represent one of the most important threats against many nations of the planet.