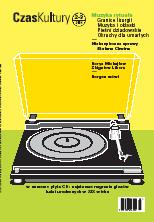 Summary/Abstract: The unique Muzyka warta poznania CD contains 80 folk pieces of the Wielkopolska Region. These are performed by musicians who were born in the 19th century. The person behind the project is Maciej Rychły who wanted to access the oldest recordings archived in the Polish Art Institute of the Polish Academy of Sciences. These were made in the 1930’s, 40’s and 50’s by Jadwiga and Marian Sobieski who travelled across Wielkopolska recording songs, couplets and instrumental pieces performed by the inhabitants of rural areas. Working on the recordings was not easy. One of the problems was the poor technical quality of the material. Another difficulty was arranging the different pieces into a cohesive collection. The solution turned out to be “the story of the human life”. Thus the record contains pieces which refer to courting, getting married, running a farm and nursing children. According to Maciej Rychły, these oldest recordings of original folk music are capable of “opening the imagination and motivating to act” since the pieces convey an image of past times which intrigues us with its warmth and simplicity and can easily find a place in the hearts of modern listeners. It should be added here that the Polish Art Institute archive contains an impressive number of further such recordings awaiting future commercial release.