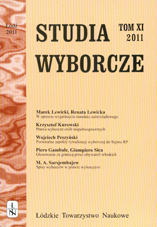 Summary/Abstract: The election of June 1989 were one of the most important event in Polish history. In this article was presented their origins and influence on political economic and social system. They also started the evolution of party system and state government. The election of June 1989 swept communists from nearly all the contested seats, demonstrating that the PZPR’s presumed advantages in organization and funding could not overcome society’s disapproval of its policy. In August 1989, Tadeusz Mazowiecki became prime minister of a government committed to dismantling the communist system and replacing it with a Western-style democracy and a freemarket economy. One of the most important consequences of the election was fall of the communist elite because of that polish politicians emphasized their influence on democratic transition in Poland.