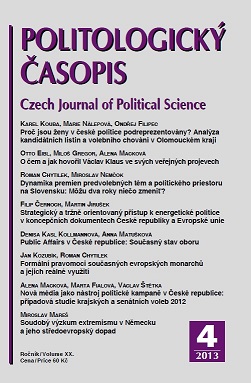 Summary/Abstract: Political communication has been undergoing a profound transformation in recent years following the appearance and rapid spread of new media. The use of new media, such as social networking sites and other internet platforms, is increasingly being exploited by all types of political actors, but particularly by those involved in electoral campaigns. Attempting to explore the presence of these trends in the Czech Republic, this paper focuses on the Senate and Regional Council electoral campaigns that took place in October 2012 in the Czech Republic, with the primary aim of comparing the differences in new media usage between candidates. A comprehensive analysis was based on a dataset obtained by monitoring the use of various types of new media by candidates, namely traditional websites, blogs, and the online social networking sites Facebook, Twitter, and YouTube. The results show that younger candidates in regional elections engage in online campaigning more intensely than older candidates. The findings also demonstrate that Senate candidates use new media more extensively than candidates for the Regional Council. The most commonly used new media in both types of elections were traditional websites and the online social networking site Facebook. Regarding the candidates’ political affiliations, the analyses came to the conclusion that the usage of new media was generally similar for all major parties with one exception. The candidates from the Communist Party of Bohemia and Moravia used new media very sporadically and, moreover, most of them used no new media platforms at all in either type of election campaign.