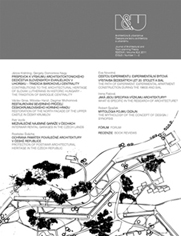 Summary/Abstract: The first modernist buildings in the Czech Republic received landmark status as early as the 1960s. Theoretical arguments in favour of protection of such relatively recent structures were first formulated in the volume Ochrana památek moderní architektury [Protection of Landmarks of Modern Architecture] published in 1970 by the Brno art historians Václav Richter and Zdeněk Kudělka. It was their view that architectural monuments should not be regarded merely as historical documents, but as artworks in their own right. For such buildings as official Communist ideology could not regard as illustrating social progress – for example, “capitalist” private villas – this stress that Richter and Kudělka placed on artistic aspects helped protect them against ideology-based destruction or iconoclasm. Kudělka moreover believed that architects in the 20th century still addressed the same aesthetic problems as the architects of the past, such as the question of the relationship between architectonic space and mass. This faith allowed him to overlook the differing historical circumstances of an architectural monument’s origin and expand the chronological boundary of when to start protecting landmarks up to the very present. Richter’s and Kudělka arguments were made in favour of the monuments of Functionalism, thus largely confined to buildings more or less constructed before 1939. In the succeeding decades – even after the fall of Communist rule in 1989 – this boundary has not significantly changed. In Prague today, only about 12 postwar buildings have landmark protection, and the situation is hardly better in other Czech localities. As a result, many important architectural works from the 1950s up to the 1980s have been demolished outright or damaged through insensitive rebuilding. One particularly tragic episode is the destruction of the shopping centre Ještěd in Liberec (1968 – 1979), the work of architects Karel Hubáček and Miroslav Masák. Yet not even important buildings from the interwar period are altogether safe, as can be seen in the case of the Prague commercial building for Albert Habich (1927 – 1928) by architect Josef Havlíček. Moreover, the actual historic preservation institutions in the Czech Republic have only the most tentative of positions. They now stand on the defensive, under pressure from moneyed interests and inclined more to side with the owners of even quite valuable buildings against the public good. And the debate on post-war architectural heritage displays its own ideological iconoclasm, if the polar opposite of the pre-1989 stance: often facing the question of why we should protect “Communist monstrosities.” Rhetoric of this type has often threatened the exceptional adaptation to the building of the former Czechoslovak Federal Assembly in Prague (1965 – 1972) from the team of Karel Prager – Jiří Albrecht – Jaroslav Kadeřábek. Perhaps even more strikingly, in the face of the efforts by Richter and Kudělka to question...