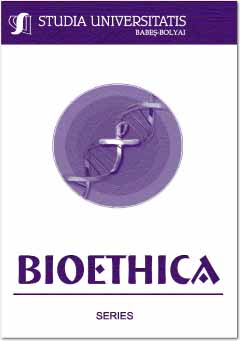 Summary/Abstract: Consequences of Abortion and the Confession. The author presents some aspects of the moral consequences arising from the choice of resorting to abortion, when the future child is not wanted by the woman. Biology, medical sciences and modern biotechnology, in addition to cultural and biographical model, provides new elements of the knowledge on mystery of begin of life, in order to be possible the classification and moral fondements of what we call abortion. After presenting the scientific and cultural arguments, te author presents the Church position, thar condemns deliberate abortion, considering it as suppression of life. „It is a direct violation of the fundamental right to life of human being and is a crime. We need to speak openly about the suppression of life through abortion and its moral seriousness, because of the facility with which it is used today and due to criminal and moral indifference created by a hedonistic and utilitarian culture, daughter of theoretical and practical materialism which generated a real mentality on abortion. Removing unwanted child’s life, who must be born, became a fairly common phenomenon, financed by public funds and facilitated by laws. All these make many not to feel any responsibility for that life and to trivialize a serious fault.