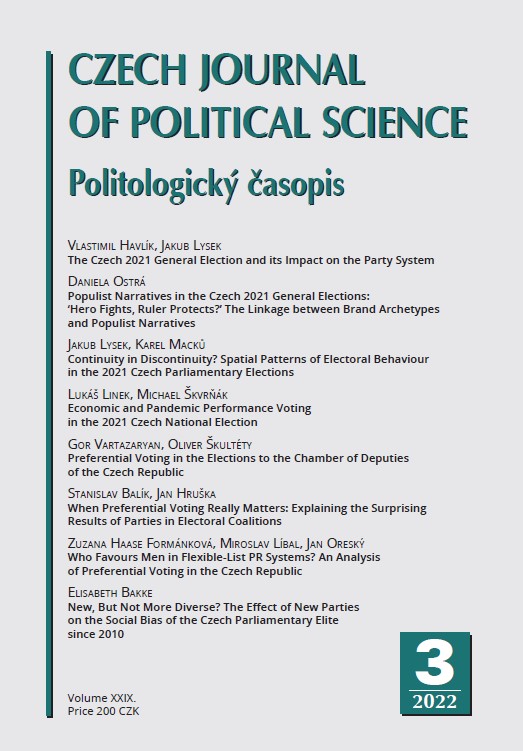 An Analysis of Preferential Voting in the Czech Republic

Summary/Abstract: The share of women in the Czech Republic’s lower chamber of Parliament remains persistently low in comparison to other European countries, and below the world average. However, in the last general election, we observed a significant rise in voters’ support for women, alongside slightly better women’s positions on candidate lists. A flexible-list proportional representation (PR) system allows both the nominating political party and the voters to influence the composition of the legislature. However, it is not yet clear whether the low descriptive representation of women is due to the voters, the parties or both. Our primary goal is to test the actual effect of the parties and the voters on the representation of women in the Czech Republic. We analyse the Czech Statistical Office’s open data on more than 16,000 cases of candidates who competed in eight Czech Chamber of Deputies elections between 1996 and 2021, and who were nominated by relevant political parties. As a dependent variable, we employ the share of voters casting preferential votes for a candidate, rather than the candidate’s success in winning a mandate, which allowed us to include smaller parties. In contradiction to the common expectation of the existence of voter bias, being a woman helped candidates get more preferential votes compared to men, not only in the last but also in four out of seven previous elections. We thus argue that it is not voters, but rather systemic factors related to parties that favour men in the Czech elections.