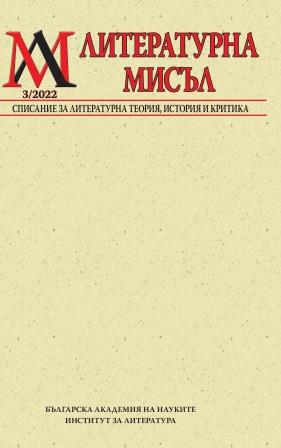 Summary/Abstract: The article starts from the well-known disjunction “love or struggle/self-sacrifice in the name of the motherland”, characteristic of the national romanticism of the XIX century (Petőfi, Botev). However, the article directs its comparative efforts in another direction – not in the international, but in the interdiscursive, mythopoetic plan. Botev, of course, is at the center of the comparison. Not only as a lyrical voice but in the whole syncretic volume of the personal heroic myth, where the prophetic poetic speech, giving rise to biographical reality, is inseparable from the biographical gesture, which in itself is “living” poetry: relations such as the poem “Farewell” and the voyage with the steamer “Radetzky”, the poem “Hadji Dimitar” and own death оn the Balkan. The dialogue between the poem “To my first beloved” and the pre-death letter to the wife (“My dear Venetа, know that after the homeland...”) is also placed here, in the same order. – But the article prefers not the opposition, but the conjunctive intertwining and finds it in the most incredible place – “To her”, considered the weakest, marginal, non-Botev poem in the monolithic poetic corpus “Botev”, a Spanish drama about love, jealousy, and bloody revenge. In the spirit of the Revival preference for allegorical shifts, this trivial sentimental-adventurous plot is inscribed in the high biographical-poetic “text-Botev”: а threat of “jumping” across the Danube “with a naked knife in the hand” and killing the old husband, kidnapper of his beloved/homeland. – But the real comparative plot is forthcoming, because the autobiographical-heroic narrative “To her”, it turns out (Iv. Paunovski), has its probable prototype in the Crastyu-Pishurkov’s “Koutkoudyachka / Нen-croaking” (the poem “Fight of Roosters”), an emblem of the most helpless verse-knitting of this era, repeatedly ironized with fierce sarcasm by Botev himself. It is here, in this inverted parody, that the article sets its second heuristic horizon. – The conclusion: what the poet Botev does not know, the work “To her” itself knows and remembers, keeps deep in his genre crypto memory.