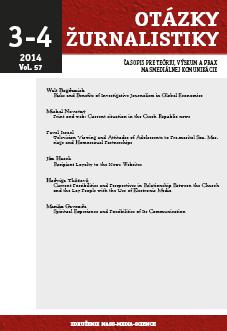 Summary/Abstract: The study deals with the issue of possible impact of television viewing on attitudes of adolescents to pre-marital sex, marriage and homosexual partnerships. The basis of the research was an assumption that due to apparent sexualization of television content, it is legitimate to querry how this may impact adolescents´ attitudes. As studying attitudes is rather complex, the author primarily focused on analyzing relationships between attitudes and TV viewing, be it in terms of TV consumption or programe preferences. Secondary goal was to look at other possible predictors of attitudes, such as religiousness of parents, parents´ attitudes, adolescents´ values and their bondage to church. The results confirmed the impact of TV viewing on the attitude disapproving pre-marital sex in such sense that the more TV the weaker nagative attitude to pre-marital sex is. Other important predictors were found, e.g. religiousness of parents and their attitudes, conformity and adolescents´ bondage to church.