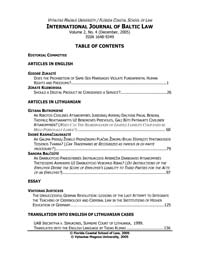 Summary/Abstract: This article presents an analysis of legal aspects and different approaches towards prohibition of same-sex marriages. Most countries prohibit same-sex marriages. However, some states have recognized the necessity of and legalized same-sex marriages or gave them some limited rights by creating “domestic partnership” or “civil union” laws. Despite this, gay couples continue to battle for the right to marry because of economic, social and moral benefits of marriage. The same-sex marriage issue viewed from the international human rights perspective raises two important issues: first, does the prohibition of such marriages violate the fundamental right to marry guaranteed under the UDHR, the ICCPR and the European Convention and second, does it violate the protection from discrimination mentioned in the above documents. The first question is difficult to answer since the definition of the right to marry in the UDHR, the ICCPR and the European Convention does not directly address this issue. European Court’s view is that the European Convention should be interpreted in light of the contemporary values of society and the democratic values that the Convention is seeking to promote. Therefore it is reasonable to argue that the right to marry should be viewed as available to same-sex couples, especially considering some instances of recognizing same-sex marriages in the world. However the right to marry is left to the discretion of national legislature. This means that individual states are free to prohibit same-sex marriages. Unlike the European Convention, the ICCPR does not mention this deference to domestic legislation and seems to provide greater hope for same-sex couples seeking their right to marry. The second question arises out of the universality of human rights. Arguably, same-sex couples that are prohibited to marry are discriminated against on two grounds: sexual orientation or sex. The former is not explicitly stated in the international documents as the latter is. Arguably, there are no valid reasons for prohibiting same-sex marriages. To justify discrimination based on sex is even harder since sex is regarded as a suspect class and a state must show a compelling interest in order to have laws that discriminate on this ground. In conclusion, the issue of same-sex marriage is complex and many-sided. In addition, the practice of courts dealing with it is also limited. Despite the fact that the same-sex marriage issue has not been widely and uniformly considered by courts and different opinions have been formed with regard to the issue, the human rights approach that was analyzed in this article demonstrates that prohibitions on same-sex marriages does violate the right of equal treatment.