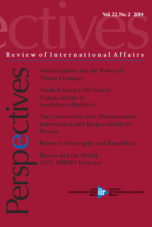 Summary/Abstract: Critical security scholars and securitization scholars in particular increasingly argue for a more context-sensitive approach to studying how security is constructed and performed in different social spheres. This article looks at the practice of threat construction in narrow and discursively-oriented environments, such as the United Nations Security Council, and discusses the prospects of conceptualizing and analysing this process empirically. Arguing that securitization in such a specific setting can be understood as a highly context-dependent practice of negotiating the meaning of threats, the paper develops a new approach to studying this kind of securitization. It builds on the advancements of securitization theory and deploys certain tools from framing theory to develop a new framework for a situated discourse analysis of securitization. This framework is then applied in an analysis of how terrorism was securitized in the Security Council after the 9/11 attacks on the United States.